Hubs was actually out of town for Valentine’s Day proper. Combine that with the fact that we don’t like battling crowds and you’ll realize that, for us, celebrating Valentine’s Day a little late was just fine.

Hubs came back on Friday with reservations for Restaurant Eve’s Bistro Room. Restaurant Eve is the brain child of Cathal Armstrong and is the sister restaurant to Eamonn’s (fish and chips), PX (speakeasy), and The Majestic (upscale casual dining). They feature a three course meal in the Bistro Room on Friday and Saturday nights as well as a Tasting Room with five, seven, and nine course tasting menus. Eve is so awesome that they will even specially make a menu for those with dietary restrictions so Vegetarians, Pescatarians, Gluten intolerants, etc. have no fear! 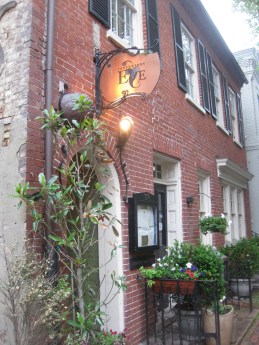 Hubs and I went with the three course meal in the Bistro Room. They started us out with some delicious, hot from the oven Ciabatta bread and a little Irish Butter. (I think Irish Butter is one of God’s gifts to us.) Hubs and I each got a cocktail too. At $12 or $13 each, they weren’t cheap but they sure were delicious! We each got to pick an appetizer, entree, and dessert from a list of about 8 options for each course. These were some of the hardest decisions I’ve made in a while!! 🙂

Hubs picked the beef tartare with rye bread and I went with the papri chat (an indian themed dish with chick peas, onions, and a variety of sauces). Both were delicious and sizeable servings. For our main course, I got the rib eye steak with marrow sauce and chantrelle mushrooms while Hubs opted for pork belly. My dish was one of the best things I’ve eaten. I’m not a big red meat eater (or, meat eater for that matter) but I knew this was the place to go for it if I wanted to. The steak was ENORMOUS compared to what I was expecting and the chantrelles added something special. I wanted to head into the kitchen, find Mr. Armstrong and give him a huge hug. Hubs said his pork belly was surprisingly spicy but he happens to love heat so that’s a good thing.  We also split a side of beet and bacon risotto which I could easily request as a final meal (were I on death row). Neither one of us could finish our meals, but our tummies were very happy.

We ended with fantastic desserts. I selected, on the waitress’ recommendation, a caramel-orange-chocolate tart and had to restrain myself from picking up the plate to lick afterwards. Hubs went with the creme brulee which had a side of little cookies and chocolates. I snuck a little bite of everything and his was almost as good as mine.

The verdict? Restaurant Eve was a WONDERFUL place to celebrate Valentine’s Day. The service was great, the drinks were strong, the food was impeccable. It is on the pricier side but it’s one of the only places in DC where I feel like I’m getting more than what I paid for.

Other positives: Eve uses a lot of local and organic products which I love! They also allow you to order ala carte from the Bistro menu and “bar food” menu (which serves deviled eggs)! Hubs and I went back a week later to eat in the bar and had a wonderful (much cheaper) meal. Finally, if you work in the Old Town area or are there around lunch time, they do a $15 lunch that is supposedly delicious.

Oh, and if you need an eating buddy, just let me know and I’d be happy to accompany you!